About
Neo Tokyo Skies
Previous Next

What is Neo Tokyo Skies

Neo Tokyo Skies (NTS) is an original science fiction universe created by Richard Vere. Since 2010 it has been the setting for numerous games including a number of video, tabletop and card games.

Participants describe their characters' actions through speech based on their characterization. Actions succeed or fail according to the rules provided. Within the rules, players have the freedom to improvise; their choices shape the direction and outcome of the game. 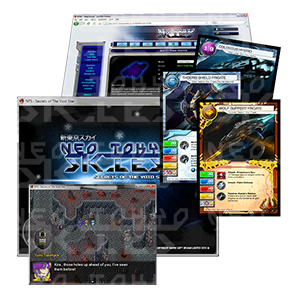 Who is The Author / Creator

The creator of the game system and author of the NTS universe is Richard A Vere or Raven as the local community know him. Richard has been playing tabletop games and RPG’s since the late 80’s and been building his own games for almost as long. He’s very active in the local gaming community and regularly organises and attends events related to the hoby. His most recent community project is Chelmsford Tabletop, an open meet up for tabletop gamers in the Chelmsford / Essex area of the UK. This project brings a number of local groups together to expand the hoby through mutual shared interest.

The Neo Tokyo Skies universe is a long running theme throughout Richards sci-fi games, and while still a hobby, he hopes that by releasing some of the background and rules of the RPG system, others might also be able to enjoy it as much as he has. Feedback is of course always welcome!

Neo Tokyo Skies designed and created by Richard A Vere. Copyright is reserved on all materials presented on this site unless otherwise stated.